The paper I have reviewed can be found here and appears to be lead authored by a graduate student form New Mexico State University, Kyle Rankin. As such it is by no means a ‘perfect paper’, however it is written at a level that I could easily understand. A lot of the results are not presented in the most logical way and, in particular, many of the diagrams leave a lot to be desired but despite this, I really enjoyed reading the paper and would be interested to see if anything further comes of the findings.

This paper was about the interesting concept of an x-ray band, ultra high resolution space telescope, using a type of lens which requires a focal length of several hundred metres. This means that realistically the lens and the camera must be on separate spacecrafts, but in order to observe these spacecrafts must be held in perfect formation as they independently orbit the earth.

Some key parameters for the observations are investigated in the context of how these affect the fuel consumption and thus the lifetime of a mission. These parameters include the pointing direction of the telescope, the period of observation and the focal length of the lens. First however, the author establishes a model for investigating this and tests its validity against well-established data.

The model itself assumes a Keplerian orbit for each spacecraft ignoring any perturbations due to other bodies, electromagnetic effects, atmospheric effects or solar radiation pressure. It establishes a set of linearised equations which are solved numerically in Matlab as a simulation. The results of this simulation are compared against GMAT (General Mission Analysis Tool) which consists of very well validated orbit models and is thus used as a truth model.

It is found that whilst the linearised model does deviate from the truth model at some point, for focal lengths between 100m and 1km it remains valid for a good number of orbits. The deviation between model and prediction can be seen in this graph: 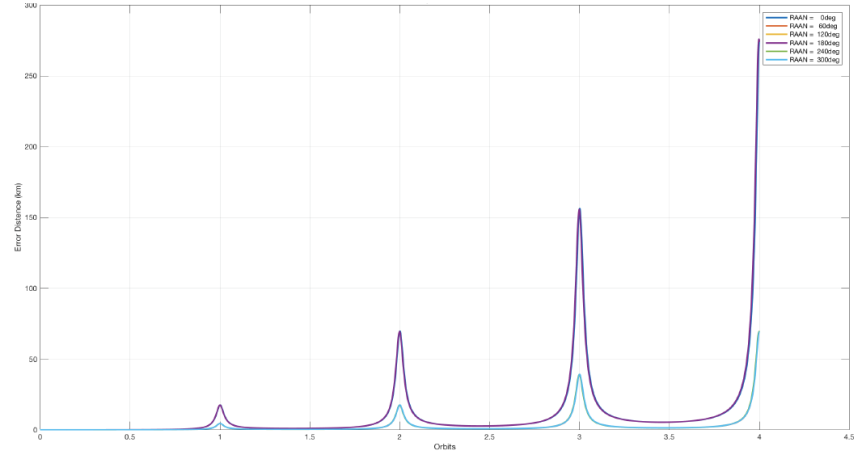 Next, by finding the amount of acceleration required on one of the spacecrafts, whilst allowing the other to follow its natural orbit, the fuel consumption was found for various conditions. Firstly the pointing direction of the telescope was varied to find what orientation required the minimum fuel. Plotting the acceleration required for each pointing direction, it was found that the required accelerations clumped depending on their right ascension angle. Whilst most, as expected, would require minimum acceleration at the furthest point in the orbit, this was not found to be the case for all, and although it is not explained why, I would be very interested to know more about this. Minimum fuel consumption was for the axis of the telescope to be normal to the plane of the orbit.

The amount of fuel required to hold formation during observation can be found by integrating under an acceleration graph and when normalised for fuel consumption per hour of observation time, it was found that up to around one and a half hours, an increase in observation time did not have much effect on increasing the rate of fuel consumption. This is shown in the following graph, which is approximately flat up to around 1.5 hours:

The lifetime of a mission was conservatively estimated by assuming the amount of fuel  that the spaceship would carry and the rate at which it would use this fuel according to the previous results. In the end, the paper concluded 1000 hours as a very conservative minimum for the total observation time achievable.

CR7 and similar spectroscopic study with the HST grism

Visual classification of galaxies in a super-structure