Charles Kettering was an engineer in the first half of the 1900s and you could say he was a very successful scientist, being the holder of 186 patents and being the head of research for General Motors for 27 years. You wouldn’t think that he’s a ‘failure’ or ‘full of mistakes’. And yet, this is a real quote by him. In science, including physics, we’re often made to believe that we have to be perfect, that everything has to go right first time, that we need to understand everything as soon as it gets explained to us. However, some of the most successful scientists have a life riddled with mistakes. Even Einstein isn’t free of them, and he’s widely regarded as one of the most influential (if not THE most) in physics and astronomy. He added the cosmological constant to his equations of general relativity, to make the equations compatible with the Universe being static, which was something that was believed at the time (which is no longer something we believe to be the case). When the Universe was found to be expanding, he scrapped the constant, another mistake which was realised to be a mistake when we discovered the universe is not only expanding, but accelerating.

So, in our internship, we have taken this philosophy of making mistakes to heart and made plenty of them. As a group of two second years and one first year, failure is part of the process, so we’ve made our fair share of mistakes or gone down the wrong rabbit hole more than once. In this blog post, we’re going to explain some of our mistakes and how we fixed them or used them as a learning process if they were unfixable.

Starting with our first mistake, when trying to understand how appropriate different EW and Sigma cuts, we thought it would be useful to do histograms of the spectroscopic redshift and calculate the mean and standard deviation of them: 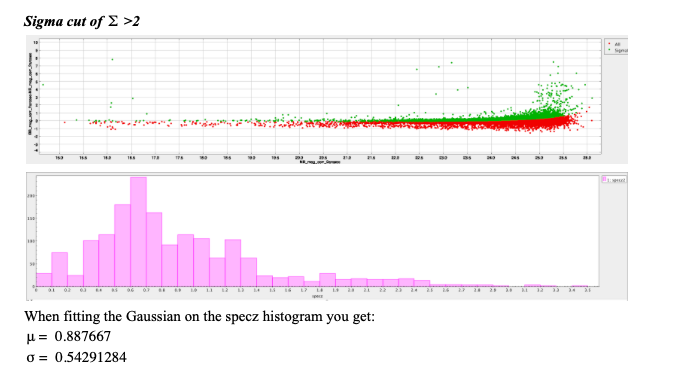 Turns out this tells us absolutely nothing, but we spent a good long while making fun little histograms for no real reason. The reason this doesn’t tell us anything is because they will need a relatively large standard deviation even if the cuts are appropriate, because we’re finding emitters at various different redshifts in that filter so they don’t need to be a Gaussian as there will be multiple peaks.

We then, much to our own surprise, did some things right! Started calculating some redshift ranges that different emission lines would need in each filter to be detected. But then, surprise surprise, we went wrong again. These redshifts were meant to be used to calculate the purity and completeness of a sample after different cuts. And whilst this is something we did correctly, our understanding of Equivalent Width cuts was a bit misguided. We were going off equivalent widths values in the Sobral et al 2017 paper, but didn’t realize that we were creating the cuts with observed equivalent width whereas the Sobral et al 2017 used rest frame equivalent width. This meant that our tables that we painstakingly spent hours and hours doing had EW cuts that were so low that they made very little difference.

However, whilst we complain and grumble, these mistakes (and a lot of coding errors in python) have lead us to a lot of learning and progress, and we’re excited to see where this internship takes us and just how much we can learn from it.

CR7 and similar spectroscopic study with the HST grism

Visual classification of galaxies in a super-structure